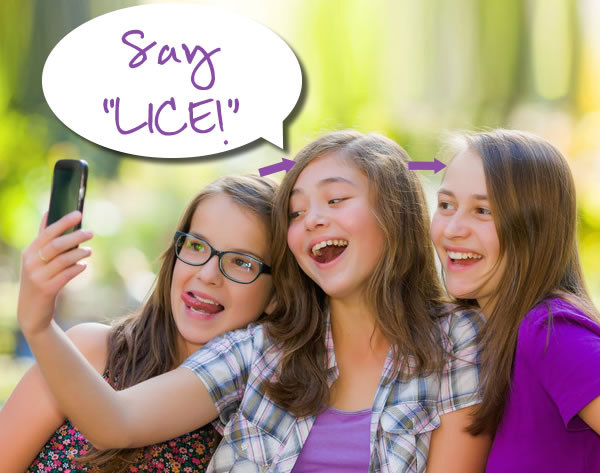 Lice infestations are most common in young children, who often contract the bugs through the way they play and interact with one another.

The U.S. Centers for Disease Control and Prevention reports about 6 million to 12 million infestations occur in kids ages 3 through 11 years old each year.

Is your child at risk?

Head lice are a common problem because of its highly contagious nature yet completely treatable. Pediculus humanus capitis or head lice infestation affects most children at some time during their school days.

Unfortunately, most physicians prescribe toxic prescriptions to kill the lice.
Please read this story before you use these toxic products.
Jesse’s Story

When treating my child for head lice, I never thought about the harm it might be bringing to him. I felt only the anxiety all mothers feel when they discover bugs in their child’s hair. It never occurred to me that a physician-prescribed shampoo could be a dangerous and potentially fatal pesticide.

Telling our family’s story is extremely difficult for me. It requires me to confront my demons. It is agonizing to accept my role in my son’s pain and suffering. The memories are vivid and haunt me through the night. If I think about my role in Jesse’s pain and suffering, I’ll never make it through the day. I fought so hard to keep Jesse alive; it is a daily challenge to handle the reality that I may have contributed to his death.

Our nightmare began in 1984. There was an outbreak of head lice in our local elementary school. Several children were discovered to have lice, including Jesse’s older brother Jason. Our children’s pediatrician prescribed Kwell shampoo with refills. He never mentioned it being a pesticide product..advising only that it could cause skin and eye irritation. The doctor ironically suggested “just to be safe” I treat the entire family, even though Jason had been the only member afflicted. I followed his recommendation shampooing my husband, myself, Jason (age 7) and little Jesse (age 2). I repeated the application on the following day as the prescription instructed.

Jesse was hospitalized and received chemotherapy for six weeks until he achieved remission. During this time, the doctors asked many questions.. “Had there been a family history of Leukemia?” “What about chemical or electromagnetic field exposures?” There were no questions concerning head lice shampoo or anything similar. The connection never even crossed my mind.

Jesse sailed through the last of his chemotherapy, and remained in remission. He had been off treatment for over a year, and cancer free for several years when he started elementary school. Our family and his doctors were feeling optimistic that he had beaten his cancer.

A note from the school nurse was sent home a few months into his first school year. There had been cases of head lice reported. My reaction was panic. “Not again!” I brought out the lice shampoo and treated my family…as the doctor had said, “just to be safe”. Two months later Jesse relapsed. I am very sad to say this scenario played out two more times within the next five years. The fact that I did not get the connection is the guilt I must live with the rest of my life.

Jesse’s final relapse occurred after a bone marrow transplant. When the doctor called, he had more than the gut-wrenching news of my son’s relapse. The doctor explained that this relapse had been very abnormal and unusual. In fact, only a handful of similar ones had been documented worldwide. Jesse’s relapse had occurred within the new donor marrow. He had received marrow from his baby sister Bobbie Sue – her marrow was female XX chromosomes. This was leukemia in the new XX marrow. This was scientifically profound because relapse by definition is “reoccurrence of the original cancer cells not eradicated by chemotherapy, radiation, or surgery”. There was none of Jesse’s old marrow remaining. This was not the original cancer: it was a new cancer in the new marrow.

My reaction to this news was complete panic. My concerns were that my daughter now also had leukemia. The doctor assured me this was not the case at all – Bobbie Sue was fine. He went on to explain that this relapse, however, did strongly indicate an environmental trigger. He asked me to try and recall if Jesse had been exposed to any substance prior to initial diagnosis and relapse. The only commonality I could remember was I had used the shampoo before his diagnosis and each subsequent relapse. It was very hard for me to believe, however, that head lice shampoo was a carcinogen. I embarked on research to prove to myself that I could not have possibly done anything to harm my son. My heart broke when I discovered how this shampoo was a neurotoxin pesticide and inherently dangerous. There was evidence strongly suggesting a link between this pesticide product, cancer, and neurological problems.

Armed with this knowledge, I was convinced we could win this battle. I would help Jesse get well and protect him from this dangerous trigger. Unfortunately, I was too late. He passed away September 11, 1993. Jesse was and remains my little soul mate. There is not a day that passes that I do not think of him and deeply miss him.

Our family has felt betrayed by a system we assumed would protect us. Prior to using these FDA approved pesticide shampoo treatments, all members of our family were healthy. Following the exposures, Jesse was diagnosed with acute leukemia and passed away 09-11-93, Dale (Jesse’s father) was diagnosed with chronic leukemia – he passed away 02-12-98 and Jason (Jesse’s brother) has a diagnosis of chloracne, a condition associated with pesticide exposure.

For years I was unable to do anything but grieve, but I now know that it is critical to get this information out to other families so they can make the safest choices possible. I made a decision not to focus on how differently the lives of my family might have been if this information had reached us sooner. After careful thought, I decided to take that energy and direct it towards trying to educate and hopefully protect other children and their families by working with the National Pediculosis Association to promote their message of pesticide-free manual removal of head lice and nits. Jesse would want it that way

Home Remedies To Get Rid Of Head Lice

Lice are not fond of the strong aroma that garlic puts off and the fact that it can suffocate them makes this a highly effective home remedy. Grind ten or more cloves of garlic into a paste and mix in three teaspoons of lime juice. Apply the mixture directly to the scalp. Be sure to cover all the scalp. Leave the treatment on for thirty minutes and rinse with hot water. The strong fragrance of garlic can suffocate lice, ultimately killing them.

Not only is Mayonnaise is an excellent natural conditioner and natural hair straightener but also a great way to suffocate head lice.

White vinegar is such a versatile, non-toxic substance and is even effective in eradicating head lice. Mix equal parts vinegar and water and pour over hair. Comb hair thoroughly.

Lice detect the acidity of orange juice. Apply 100% pure orange juice to your head and scalp. Put on a shower cap and leave for 30-40 minutes. Comb through with a nit comb and rinse with warm water. Follow with your usual shampoo and conditioner and comb again.

Using Listerine to kill lice is one of the cheapest and oldest known home remedies for getting rid of lice. Soak your hair completely in the mouthwash and put a shower cap for about four hours and shampoo as usual and comb.

Neem and neem oil contains an insecticidal ingredient known as azadirachtin which is a powerful natural insecticide which interferes with the reproduction and growth of head lice. It constricts the swallowing capability of lice which starves them to death. Lice hate the strong aroma of neem oil which will help soothe itching and redness caused by the lice. As an added bonus, neem adds moisture and shine to hair.

Both the leaves and neem oil are useful for treating head lice. Here are a few methods to try:

Essential oils are extracted from plants through steam distillation or cold pressing. Oils are loaded with therapeutic properties many of which can help destroy a lice infestation. In a 2012 study, researchers found that a 1% concentration of tea tree oil killed almost 100% of head lice in a 30 minute period. A 2% concentration halted 50% of egg hatch after 4 days. Other oils that are effective against head lice include ylang-ylang, rosemary and lavender are also great options. To use essential oils to kill head lice, mix 20 drops of oil in your regular bottle of shampoo and shampoo as usual. Rinse with apple cider vinegar for added lice killing power.

Need any of these essential oils?

Follow these tips to avoid getting lice in the first place:

Here is the book I personally use when a problem comes up.

This site uses Akismet to reduce spam. Learn how your comment data is processed.